A Little Hodge Podge For Tuesday... 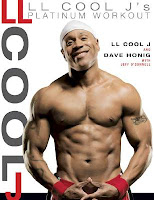 Will be participating in tomorrow night's The Promising Series panel at A Different Light Bookstore on 8853 Santa Monica Blvd. in West Hollywood. It starts at 7:30 pm, Wednesday, February 13. Read more from series director, Noel Alumit.

I guess I didn't get the memo... still on dial up. Since when did LL Cool J turn 40? And why does he look as good as he did when he first started rapping... heck, better than he did in the day? Those SMITH genes, I tell ya. Thanks Hoodsworld for the images. :-) Oh... and yeah, LL did put his workout secrets on paper in his Platinum Workout book.

Um. So I stumbled across one of my young cousin's MySpace page last night. It had some pretty interesting and unknown information, friends, habits, and (foul/dirty)LANGUAGE... that I don't think the fam would really feel. Should I pretend I never saw it? Say something to the fam? We're talking a newbie at the college level... the parents are still footing the bill.

Finally, just ordered the novel The Senator's Wife by Sue Miller. Something about unhappily married couples who stay together anyway... especially wives who stay, even though they know he strays... kinda has always fascinated me. A few years back, I read her novel While I Was Gone, and was hooked on her work.

yeah, i'm sure your interested. it's hilary rodham's life!

Yes I would say something to the family about the language on the cousin's myspace page.