If You Don't Start In The Morning

Aaah, Sunday morning. Still re-adjusting to West Coast time. Been up with the grandparent crowd since the crack of dawn piddling around. Anyways...

Got a notice about this new book, You Can't Drink All Day If You Don't Start In The Morning, by Celia Rivenbark. It's a collection of humorous essays and recipes about southern U.S. life. Sounds fun, along the lines of Chelsea Handler's Are You There Vodka, It's Me Chelsea.

Anyway, if you're in the Atlanta area, Celia Rivenbark will be doing a reading at one of my favorite bookstores, Outwrite Books & Cafe, on Thursday, September 3. Go check it out, along with other great September events there.

In the meantime, drinking in the morning may not be the most productive thing (though it might be a tad fun)... but starting on some exercise, writing, organizing your bills and papers, or getting your to-do list together in the morning is.

Have a good one!
fs
Posted by Frederick Smith at 8:29 AM No comments:

Still in midwest, enjoying the final days of summer and taking care of some family business.

But is it just me, or are these cries about "socialism" in regard to President Obama's initiatives just the safe cover up for what they really want to say about having a black president? And you can only imagine what they say behind closed doors.

Is it just me, or did tipping go out of style in the black community? Read Openly Chaz blog for a child of the 90s perspective.

Is it me, or are all the 30-somethings (and above) kinda excited about the new Whitney Houston cd, coming out on Monday!

We gotta still share the love for President Obama that we shared/felt back in January, or else they will speak out enough to take the next few elections. Can't let that happen y'all.

Hope you're feeling like a Million Dollar Bill! :-)
fs
Posted by Frederick Smith at 7:42 PM 2 comments:

Just a little over three weeks of summer break for me, and I'm just hanging on to the days. It's all about making those memories.

So excited to hear that Drucilla is still hanging on to that cliff, and that fan favorite Victoria Rowell may be in talks to return to Young & Restless. Favorite character. Favorite show. Winning combo. The show (and the Winters family) aren't the same without her.

For years at the gym, I'd been hanging on to the myth of "only muscle guys work out in that area." This summer, thanks to a 12-Week Bodybuiding.com online training site, I've learned the ins and outs of the mysterious free-weights zone and time-effective cardio sessions, and I'm so sorry I've been missing out for so long.

Finished novel #3 and it's on its way. I have a tentative title in mind, but I'm always open to the publisher's and agent's suggestions. They do this for a living. For me, it's fun. Starting #4 while I still have some days of summer.

Saw Beyonce and the Queen, Aretha Franklin this summer in concert. So happy Whitney Houston's comeback is pretty secure and sounding great!

Saw way too many movies this summer. Rather, I should say too many mainstream/blockbuster films. Not my normal cup of tea, but my pics for best summer films: 500 Days of Summer, Star Trek, and District 9. I predict lots of Academy Award love for District 9.

But hey, there's still some summer to hang on to... get out there and make more memories and have some good times. It's not too late!
fs
Posted by Frederick Smith at 8:36 AM 4 comments:

I absolutely LOVE this cover... because hey, we've all been there. Happy, but a little wishing it was us.

I've channeled the feeling into a new term I use freely and openly... happily jealous. It's when I'm genuinely happy for someone, and wishing I were sharing the news or announcement.

Anyway check out the novel, I'm So Happy For You by Lucinda Rosenfeld. It's about two best friends who don't necessarily like each other, but still remain in each other's orbits. It's sure to keep you and your friends talking about your own happily jealous moments.

In the meantime, let's just shower praise and gratitude on everyone around us today, tonight, the rest of the weekend. Watch how much better you feel and how the atmosphere changes around you!
fs
Posted by Frederick Smith at 5:29 PM 1 comment:

When a child, there were times when I would tell my parents "Stop acting so old!" when there was something of my generation they didn't get.

Now, my students tell me the same when I don't get something of their generation. Life's irony.

How Not to Act Old: 185 Ways to Pass for Phat, Sick, Hot, Dope, Awesome, or at Least Not Totally Lame is a fun new book by Pamela Redmond Satran, designed as a guide for anyone who doesn't want to embarass their kids or themselves.

Drop email. Stop leaving voicemails. Get to the bookstore -- i.e. the new HIP library -- and read this book (and others you like, but may or may not buy right away) :-)
fs
Posted by Frederick Smith at 5:11 AM No comments:

A couple of interesting finds on the net.

First, sex is a billion dollar plus industry. The new anthology, Hos, Hookers, Call Girls, and Rent Boys: Professional Writings on Life, Love, Sex, and Money, gives voice to an industry frequently looked down upon in society (yet ironically utilized so frequently).

Second, publishing is a billion dollar plus industry. A new (to me) website I am enjoying is Pimp My Novel, a blog written by a publishing sales rep, to help novelists (and aspiring ones) see what happens once a publisher acquires your product and how it gets prepped for selling to bookstores and other outlets.

No matter your preferences, prudishness, or politics, everyone needs to make a living... some go conventional and some go unconventional... as in a career in the creative arts!
fs
Posted by Frederick Smith at 1:47 AM No comments:

First, hats off to Entertainment Weekly for keeping up its weekly book coverage.

While most media are devoting less space to books/reviews, EW still provides an outlet in the magazine and on its book blog, EW Shelf Life. And I love the fact that books are considered part of the entertainment industry, based on EW's continued inclusion in its magazine.

Next, so many books coming... so little time... so much less money, with furlough Fridays in California. But here are a few that might be of interest to you:

Beantown Cubans by Johnny Diaz. His third novel following the trials and tribulations of young, gay characters in Boston. I enjoyed his first two novels. Johnny, by the way, is a labelmate of mine at Kensington.

Drama Queers by Frank Anthony Polito. His second novel, following the high school angst that comes with growing up gay... in suburban Detroit. Also a labelmate.

Not a label mate, but a literary role model... Eric Jerome Dickey will soon be releasing another novel, Resurrecting Midnight, in a few weeks. His recent work has delved into the world of crime and suspense.

I can't list them all here, but what new Books n Thangs have caught your fancy that we should know about?
fs
Posted by Frederick Smith at 4:06 AM 2 comments: 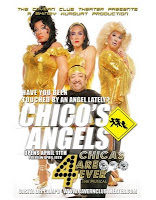 Digression. The point is summer...

Saw a great film today that I highly recommend. 500 Days of Summer. Anyone who has experienced the beginnings and endings of a significant romantic relationship will relate.

Saw a hilarious play last night that I highly recommend. Chico's Angels. The Angels have quite a following here in L.A. and soon the show will be going on the road when the current L.A. run ends this weekend. YouTube clip Chico's Angels. Loving it.

Finally, my days of summer are gonna get a little sweeter. It's called Furlough Friday at the day job. And though it's going to hit the paycheck immediately, I'm looking forward to the Fridays off for personal projects, writing, and errands. Always looking on the bright side.

Hope you're making some fond summer memories!
fs
Posted by Frederick Smith at 9:11 PM No comments: