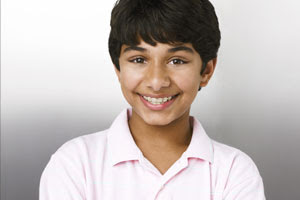 So one of my favorites this season has been Ugly Betty for a number of reasons. Yeah, we all know the show is fabulous.

But from a writer's point of view, it's amazing that an ensemble show can have so many characters that we care about, and who all have a story that makes them self-sustaining... meaning, they're not dependent on another character to have an interesting backstory or storyline.

One of those characters I'm totally loving on the show is the character Justin Suarez, Betty's fashion-loving, high-energy and enthusiastic, odd-guy-out, nephew. Whether he's giving his mom or aunt clothing tips, or singing a medley of Broadway musicals, or just swinging his hands in the air while dancing... we see our 12-year-old selves in him. Well, I do. And I'm sure many other present-day 12-year-olds are, too.

Yeah, we cringe at times. Yeah, we feel the parental/family angst "Is he or isn't he?" But the cool thing is how the writers (and the fictional Suarez family) are letting Justin just be who he is... the way parents and families should let their kids be. Themselves, without trying to change them. And I know it's going to be a great storyline payoff years down the line as the writers delve into the "Is he or isn't he?" subject, but honestly it really doesn't matter.

I'm sure some kids who watch Ugly Betty are loving that there's someone like them on television. Can you imagine a kid like Justin on TV in the 80s or 90s? The show is just so issue forward -- remember the episode where Betty educated her dad on the difference between a transgender and a transsexual? It was a nice "teachable" moment... the way art should be used to educate the general public.

Anyway, this entry has absolutely nothing to do with writing, or books, or all that jazz. But in a way it does... it's nice seeing the writers tackle issues in a way that makes them not issues. Justin Suarez just is... and all of our characters in our fiction should just be... part of the landscape, and allowed to be who they are, as if they're just like everybody else.

In other words, our characters can normalize issues and groups that should already be considered normal.

The good thing about this time of year is if you haven't gotten around to starting all the new goals of the year you wanted, you get a second chance.

Lunar New Year begins on the first new moon of the new year, which begins February 18. Lunar New Year is a celebration of change, rings in all the good, closes out all the bad. Often, we hear Chinese New Year, which is partly accurate. Many Asian communities around the world celebrate the Lunar New Year, not just China. This is the Year of the Boar. You might see Pig, too.

Besides red envelopes, gold coins, dragon dances, firecrackers, and red clothing (all representing luck and prosperity), I love reading about the various characteristics of the animals represented by the Lunar New Year calendar. These are part of a small handout my office puts together (original source unknown) about Lunar New Year.

Monkey (1932, 1944, 1956, 1968, 1980, 1992, 2004, 2016)
Clever and quick-witted, the Monkey is successful in every endeavor. Inquisitive by nature, they are constantly seeking new opportunities and adventure. Their intellect and versatility allow them to adapt to any situation. Many are entertained by the monkey's good humor and mischievous spirit.

Enjoy Lunar New Year celebrations, which start Sunday, February 18.... though many restaurants and households will be crowded with huge New Years dinners and celebrations on Saturday evening.
fs
Posted by Frederick Smith at 7:04 AM 1 comment:

Some Love. Some Pain. Sometime. 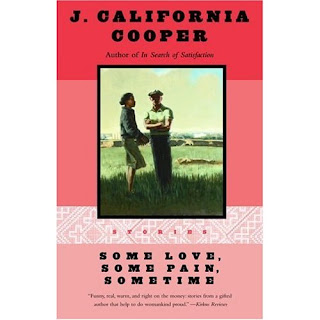 As we head into this "greeting-card-company" holiday called Valentine's Day, I can't help but write about what's on many of our minds -- whether it's for happy reasons or not-so-happy reasons.

Not that I'm currently in love with anyone. I'm kinda digging someone right now and we've been hanging out since the beginning of the year when we met. Such vague and non-commiting language, I know. Because I'm not sure if our expectations are on the same level, and honestly because it's been fun spending time with him, I don't want to jinx it by bringing anything up to show we're just not that into each other. If it's fun and flowing, why mess it up?

(If you're reading this... my fun/ny, goofball, still-getting-your-life-together, party-loving, spontaneous scheduler and flaker, server of a mean blended java, twenty-something man of multiple jobs and talents and skills... this is what you get for hanging with a writer type... you asked... we'll talk. hehe.)

So long story short, pick up or read J. California Cooper's short story collection Some Love, Some Pain, Sometime. Great stories about women who choose the wrong man, people who think they'll never find a significant other but do, and femme fatales who use every trick in the book to get a man.

What I love about J. California Cooper's stories is that the characters will tell you/teach you the things your mom or grandma would tell/teach you if they were in the room. That wonderful mother-wit. The stuff we all need. The stuff we choose to throw to the wind when we know we should take it into consideration. Just because he looks good... or makes us feel good, like a Monster's Ball "make me feel good" moment.

But ultimately, it's about J. California Cooper's writing.

Wrote about J. California Cooper before. And my favorite short story by her, "$100 and Nothing," about a haunting kind of love. 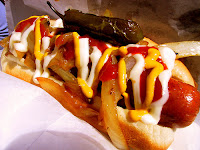 OK. So, this is going to be a stretch. And I'm freaking hungry now, a little after midnight. But this does relate to writing. A little. Just hold on.

Ask anyone in L.A. what this is, and they'll tell you. This lovely treat is called a Danger Dog.

Ask anyone in L.A. when and where you get these, and they'll tell you. It's an after-club L.A. delicacy, and people are frying them up in club parking lots or on the sidewalks outside bars. Or, uh, maybe it seems like a delicacy when you're leaving your favorite night spot, are super hungry, and have just enough singles left to shell out $2 or $3 for one of these numbers.

These hot dogs, wrapped in bacon (seduced by bacon, that's me!), and slathered with mayonnaise, mustard, grilled onions, and a whole jalapeno pepper are FAB-u-lous at 3 am. I know. I had one on Saturday night/Sunday morning. You can only get them from street vendors who work the after-club scene.

Local treats or hangouts... Danger Dogs in L.A., Faygo Pop in Detroit (gimme a red pop!), Harold's Chicken in Chicago, Junior's in Brooklyn... can add to the authenticity of setting as you're writing your short story or novel. Not only are we capturing the "who does what" angle of the story, but we're also charged with setting the scene and developing the environment around the characters.

The city your story is located is very much a "character" and these local goodies are things that contribute to a well-developed character. It's kinda cool when you're reading a story or novel, and you recognize the characters' favorites or hang-outs as your own.

Kinda like another L.A. goodie... that anyone who's spent time in the gay scene can tell you about.... talk about adding authenticity to your location. R-r-r-r-r-osas!

Now, why we call them Danger Dogs? That's a whole 'nother story, but your characters can certainly share their perspectives in your short story or novel.
fs
Posted by Frederick Smith at 12:36 AM 4 comments: 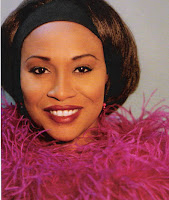 Love her performances soooooo much. Words aren't even needed. Will be there when the show runs in Los Angeles, February 10 - March 3, 2007.

If you can't catch BBB, you can love her in Jackie's Back or the upcoming Dirty Laundry.
fs
Posted by Frederick Smith at 6:45 PM 2 comments:

Set in the city of Brotherly love and the birthplace of the Declaration of Independence where all people were declared to be created equal under the law, the National Black Justice Coalition continues the dialogue of equality and equal justice with a nationwide forum on Black Church Homophobia. The summit takes place Saturday, March 10, 2007 in Philadelphia.

Over three hundred people from across the nation will gather to debate the issue of homosexuality and its role within the Black Church as well as provide solutions on how to create a welcoming and gay affirming church.

Black iconic intellectuals such as the Rev. Dr. Michael Eric Dyson plus several other religious leaders both anti-gay and gay affirming will headline the event and facilitate discussion ranging from HIV and the Black Church to debating the legitimacy of scripture referring to homosexuality.

What is NBJC?
The National Black Justice Coalition is a nationwide Black gay civil rights organization headquartered in Washington, DC. The mission of the organization is to end to racism and homophobia within the Black communities across America.

Why is the Black Church Summit important? Why should my media outlet cover it?
The factors of HIV, anti-gay violence and emotional depression are rampant within the Black gay community. Often the Black Church is ill equipped to adequately address these issues which are often swept under the societal rug.

This year’s event will once again attract nationally prominent clergy, civil rights leaders, and many opposed to and also affirming of homosexuality. Our goal is to assist the Black Church on how to embrace their lesbian, gay, bisexual, transgender friends, neighbors, family, and members of their congregations.

The continued silence of the Black gay community on issues dealing with homophobia has left the entire community vulnerable to the divisive tactics of those who do not have the community’s best interest at heart.

What does NBJC plan to accomplish through the Black Church Summit?
We plan to increase the size of our ongoing Black Church Social Justice Community Action Network which is a national coalition of gay affirming Black churches and clergy who will provide activism on ending Black Church homophobia and discrimination.

What is NBJC’s position on gay marriage?
There is no such thing as same-sex marriage, there is only marriage and we believe that all Americans regardless of race, ethnicity and sexual orientation should have the right to marry the person they love.

Can I receive more information about NBJC or the Black Church Summit?
Yes, please contact Dr. Sylvia Rhue at srhue@nbjc.org or at 202-349-3855.
Posted by Frederick Smith at 7:50 AM 1 comment: