What Did You Think You Would Be When You Grew Up? 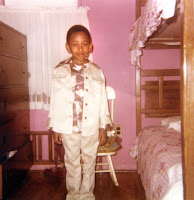 Keeping it light on Friday.

Simple question. Always a great conversation topic or starter... with someone new, or someone you already know. What did you think you would be when you grew up?

And don't get too distracted by those hot pink bedroom walls of mine from the 70s. Slap some chocolate brown stripes on it, and you've got a nice color scheme for 2007. My parents were fashion forward... yeah, that's the ticket.

Poet. My mom used to play Nikki Giovanni albums in the house when I was a kid. Loved them. Tried my hand at a few poems and won some young writers contests when Detroit Public Schools actually encouraged the arts and creativity. But got bored with poetry. And these days, public schools don't encourage a lot of arts, ideas, and culture exploration.

Car designer. I didn't know that was called an engineer. But I loved designing the outside silhouettes of cars. I thought the early 80s Cadillac Seville was HOT! And I wanted to design the next fashion forward car like that. That humped trunk... HOT!

Architect. I used to draw these elaborate floor plans of my dream home, my parents' dream home, and for families of multiple sizes. Was especially concerned that every member of the house had their own bathroom.

Soap opera writer. Um. Enough said. Young and the Restless 1986 got me hooked. Remember Nikki/Victor/Ashley -- Nikki's fatal blood disease? Ashley's abortion? Victor's affair with Ashley? Young and the Restless 2007 got me unhooked from the soap habit. I'm just a Bold and Beautiful boy now. But, my middle school friends and I would write and stage these elaborate productions. Thought we were the next Aaron Spelling-in-the-making... just waiting to be discovered in Detroit.

Truck driver. Yeah, one of these things is not like the other one. I had to make up interest in this job to mask sexual orientation issues. Never had an interest. It was my cover... kinda like some people have a cover boyfriend or girlfriend. Next.

TV Anchorman. Sometime in late middle, early high school, I got obsessed with Detroit's news anchor teams. Kathy Adams and George Sells. Beverly Payne. Carmen Harlan and Mort Crim. Nikki Grandberry and Kay Lowry. Sherry Margolis. And who could forget the 3 "D"ivas at Channel 7: Doris Biscoe, Diana Lewis, and Dayna Eubanks (my personal favorite of the 3 "D's"... she'd do the news at 5 and come back at 11 with a whole new look and hair. Fierce.) This... was one job I got to actually do, when living in Columbia, Missouri. I was "Frederick Smith, NewsCenter 8, Columbia" doing evening news stories, and morning Today Show cut-ins.

Education. One day I had to do a child abuse story for NewsCenter 8. That was the day my news-spirit died. Didn't like the assignment. Didn't like staking out an accused abuser or victim's family. Felt like it didn't add one thing to humanity, and questioned if the allegations were even true. And that day, I went home and started researching grad school options in education and counseling. Ended up at a university in Chicago. Best decision I ever made. Didn't hurt that I followed a college crush/love to Chicago, while he pursued grad school in theatre arts. I like working with college students.

Novelist. The writing bug was always there. Glad I get to do it today along with working with college students. Best of both worlds.

Though I did some, and didn't do others, I'm so glad I had parents and family members who encouraged us to do whatever interested us. But there was just one rule -- the 18 and out rule. Went like this -- at 18, you're out the house in college, or with a job and your own place. Luckily, my sister and I were both able to do the college away from home thing.

So what about you? What did you think you would be when you grew up?
fs
Posted by Frederick Smith at 7:06 AM

Awwww how cute. I wanted to be an architect.

I just wanted to be an adult, I never had a particular career in mind.

As a boy, I thought about doctor, teacher, professor, and poet. The latter actually because of Robert Frost.

It wasn't until my interest in Frost that I began to think about writing. Other ambitions have come and gone for me, writing has always remained a consistent focus never wavering. But, I never knew what area of writing interested me. Don't laugh, but it wasn't until watching the movie Age of Innocense that I understood playwrighting was the direction I wanted to go.

Let's see, I wanted to be a lumberjack as a small kid; not sure why, I think its because I thought it to be a manly position, as I too was overcompensating.

I wanted to be a pediatrician at one point to.

I wanted to be a teacher.

All through high school I was researching to be a Marine Biologist, just one problem: No Oceans in Kansas.

Then I majored in journalism for a minute, then switched to PR. I wanted to be this big entertainment publicist.

Now I think I am comfortable in non profit helping other people.

And all thru this, I have inspired to become a great writer and still write in my spare time, hopefully something will come of it one day.