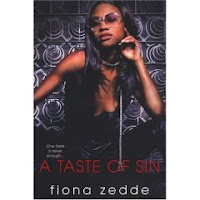 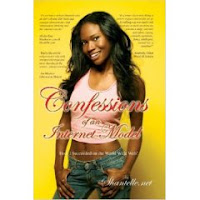 So... Unless you're self-published, or a Jackie Collins/Danielle Steel force of nature, most authors have no control over the design of their book covers.

Lies. You might get some "say" as in "what do these characters look like" (and I'll explain later how my cover -- which I LOVE -- for Right Side of the Wrong Bed came about), but that's generally about it. The publisher can take it or leave it with what you "say." And that's because publishers have a strong idea of what works and what doesn't in terms of selling and marketing books.

So yesterday at the WEHO Book Fair, Fiona and I are walking through the festival grounds, and off to the right she sees this woman at a booth pitching her book, Confessions of an Internet Model.

Fiona goes, "Oh my God, that's Shantelle from the cover of my book." The book in question is Fiona's A Taste of Sin, which came out summer 2006. I go, "Oh my God, it is!" Small talk is made. Everyone is happy. We all go on with our lives.

In 2006 when I was telling Fiona and my literary agent Nicholas that I wanted "live photos" and not illustrations for my cover, as we did for Down For Whatever, Fiona suggested I take a stroll through Getty Images, and mark down a couple dozen photos of people, places, things I liked.

I did. Along with notes about what I was seeing/envisioning: light colors, pastels, dark men, just a little man skin (but tasteful man skin), and simplicity.

Don't ask why pastels. I think I was in my chocolate brown and pastels phase, which might have been in my notes. Man skin, because it sells -- to straight women and gay men, and those who like to see man skin. Simplicity, because I noticed a lot of "busy" book covers and thought simplicity would stand out. Didn't know if those notes would amount to anything regarding the cover, but I shared my two cents with no expectations.

And voila. A few months later after sharing those notes, the Getty Images, and my visions, Kristine Mills-Noble came up with a book cover for Right Side of the Wrong Bed that I fell in love with immediately. No changes suggested. No tweaks. No hesitations. Isn't it awesome?

And now that the book will be out next month (can't believe October/November are here already), I've gotten amazing feedback from people that the cover alone will get them to take a second look and buy. Hope so.

So that's the cover story today. And no, I haven't met either of the men on the cover. But if you know them, or have seen them, please let them know they are on the cover of a fabulous new book called Right Side of the Wrong Bed.
:-)
fs
Posted by Frederick Smith at 5:46 AM