Come On People by Bill Cosby 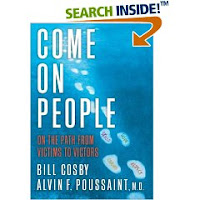 As most of you know, Bill Cosby has made it his mission to push for the upliftment of black people in the United States by looking at the areas of personal responsiblity and self-reflection on behaviors and choices.

He has a new book out, Come On People: On the Path from Victims to Victors, written along with Dr. Alvin Poussaint, who was a psychiatrist consultant on The Cosby Show in the 1980s.

I think it's a book worth checking out. And if you want to hear more, Bill Cosby and Alvin Poussaint will be guests on Meet The Press this Sunday, October 14 talking about the current state of Black America.

Not always the biggest fan of those Sunday morning news shows, because they usually only invite black, Latino, and women guests on to talk black, Latino, or women's issues... as if we can't talk about anything else.

But... I think for Bill Cosby, I will make an exception. Will you?

Have a nice weekend!
fs
Posted by Frederick Smith at 1:41 PM

a big whassup from Detroit Fred. i will be getting the book-the interview was well worth checking out. no one can save us but us!

There are many problems in black america. Don't you find it strange, though, that there are never books about white supremacy,(growing in europe or america), latino or latino crime, or asian on asian crime.
I love cosby, But, I've heard this same tired line before about what is wrong with blacks. There is no other group in america whose manhood, intelligence, music,and spirtuallity is challenged again and again.

There are those in the african american community who are working very hard to bring answers that the media hardly ever pays attention to. This 'negro problem' issue has been reported by media types since the slave ships arrived. No other group in america(and believe me, other groups in this country have their lazy, crimminals, deadbeats,etc) is this analyzed.

I love mr. cosby and what he has done, but this is the same old same old. talk to me when a book is printed about the wrongs of white americans, and I might pay attention to that.