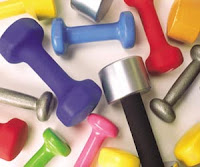 Wanna hear it, here it goes:

Meaty Muscles and Friend. A cute duo, muscular, but not too muscular. Tatted up. Real macho/machismo duo. Looks like former high school football players, but now in mid-20s. One has that dirty birdy look, like he'd hook up with the first thing that opened up on a Friday night if necessary. One looks like the good guy of the duy. I want the good guy, who recently has taken to caring about his abs... and it's paying off. Yum. They've recently picked up another friend... so now they're called Meaty Muscles and Friend... and Friend. Silly, I know.

Panda Face and Slack Jaw. Another workout duo, I think high school students, who've taken to the steroids too much over the past year. Their faces have gotten so chubby with all the muscle gain. Guys, all that "muscle" will turn to fat when you stop caring about working out.

Big Bird. A tall lady with big eyes and a Sandy Duncan pageboy haircut from the 70s.

Grand Farter. An old man, obviously a grandfather age... except, he's a grand farter on the elliptical machine which forces me to change machines when he's within a five machine radius.

Thighs and Eyes. An older gym duo. Well, older for being gym regulars. Probably pushing 50. No wedding rings. But one has nice thighs. One has nice eyes. Both drive nice BMWs and I would have no problem signing up as their sugar baby boy. lol.

Big Booty Cuban. First, I have no idea if he's Cuban. But I do know he has a big booty and thighs for such a compact, regular sized guy. Thick is what most black folks would say. Yeah, I peek when he walks by... and he walks by a lot. Second, he's the closest I've come to ever having "eye contact" at the gym. I believe he's on my team. Haven't had the nerve to say anything... he's my current gym crush o'the month.

50 Pushing 20. A woman who's got to be close to 50. Still wears long, curly locks like she's 17, a cheerleader, and still in high school. Full makeup. Chest pushed up to her chin. Flirts with all the young 20-something men. I'm jealous of her. Because she can, and probably does, get the 20-something gym boy action.

Froggy Turtle. A relatively young man, say early 30s, who definitely LOOKS capable of breaking a sweat. But chooses to walk at 1.2 on the treadmill while reading the paper, and NEVER carries a towel. But his body reminds me of a Froggy Turtle.

Molester. A 40-something guy who "pretends" to get workout tips from all the high school athletes who use the gym facility. He's a candidate for Chris Hansen's Dateline NBC, if you ask me. Leers a little too long at the adolescent boys at the gym. Nothing wrong with being gay. But definitely something wrong with lusting for minors. I give him dirty looks everytime I see him. So does my workout partner. lol.

The Little Cute Trainer. A cute little Hapa boy, no taller than 5'5. But melts the butter on my toast every time I see him.

The New Tall Trainer. A new trainer. No storyline on him yet. But he's cute. And tall.

And this is probably what gets me through my very efficient hour at the gym several times a week. My active imagination. Listening to Feast of Fools podcast. Making up stories about the boys and girls at the gym. And I know if I do it, someone's make up some nicknames about me.

I just wonder what they are... and if they're as imaginative and snarky as mine. Hope so!
fs
Posted by Frederick Smith at 12:36 AM

LOL. I think a few of us tend to make up nicknames to people we see all the time, whether it be the gym or other places we frequent and see the same people, ie grocery store, or class, clubs.

LOL that sounds like fun! I think I might have to bite your style and make a cast of gym-goers like you Fred. I'm gonna need you to holler at Big Booty Cuban tho...ESPECIALLY if you think he's a first cousin of the family :) BE PROACTIVE!