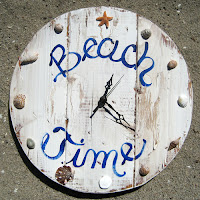 Too bad I wasn't at Shemar's beach... but I had fun at the beach in Del Mar yesterday afternoon. Swear it was like Baywatch Jr. here in SD. So many tight bodies on regular, everyday people. Made me wanna do a thousand crunches, or just head to the local brewery for another kind of six pack :-)

OK. So having good time in San Diego. Couple new resources/sites I might be late on, but nonetheless think are pretty cool.

The Africa Channel is a new cable network looking to go national in the U.S. Ask your local cable provider to add it. The premise is that the continent of Africa is more than just Darfur, Sudan, conflicts, fighting, famine, and suffering... though those are important elements to know and understand. The Africa Channel seeks to show the daily lives of people on the continent of Africa -- going to work, the 20-something scene, the soap operas (apparently Nigerian soap operas give the novelas of our South American neighbors a run for the money), the music and hip hop scene.

Then heard about this film, Honor Thy Children, about parents who refused to accept the fact that two of their three sons were gay, that the third was bully, and how their parenting results in some pretty tragic experiences for their sons. Haven't seen the film. Just got a quick snippet/preview. Sounds interesting.

So some cool things to check out. Will be checking out of SD in the morning. Hope you're checking in to a fun weekend ahead!
fs
Posted by Frederick Smith at 7:45 AM

This post was jam packed. Shemar nude--sigh. Honor thy Children will just break your heart and grind it up into little pieces. Losing a child to AIDS is tough, losing two to AIDS is unreal. Losing a third to murder--well, life just ain't fair. But I've seen the couple speak. Wow. They embody Hope.