Lights Out. Circus and Arena in L.A. Closing. 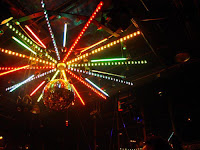 9Note, since writing this post last year a lot has changed. Circus and Arena are still open, and fun is still being had at my two favorite spots!)

I'd been hearing the rumors for months, but never anything directly from a primary source. And I'm of the school that if I don't see it in print, it's not real.

But in the latest issue of IN Los Angeles Magazine (November 12 issue, page 16, headline: Circus Disco and Arena Nightclub to close), a story says the property has been sold, that both clubs will be torn down, and that mixed-use retail and condo development will be build on the property.

Another story on the closing from Los Angeles City Beat.

Anyway, I just gotta tell you that Circus and Arena have been staples of my club-going life since I moved to L.A. in 2000. It's like clockwork. We know we're heading to Circus on Friday (and sometimes Tuesdays, lol), Arena on Saturday. I can't imagine what we're going to do. I like both places so much I set parts of my first book, Down For Whatever, in them.

But it does open up the competition for black and latino gay club-goers in L.A. And now, some venue will have to kick it up a few notches to attract all those free agents looking for something kick back, but with ethnic flavor, on Friday and Saturday night. Marketing majors... here's your chance.

In the meantime, both clubs are hosting a HUGE Last Dance New Year's Eve Celebration. Once that's done, the lights are out. And Circus and Arena as we know it, on Santa Monica east of Highland, will be no more.

Unless there's a cliffhanger ending and a last-minute save... or this is a kick-butt marketing campaign... hmmm. Can someone call Aunt O? :-)
fs
Posted by Frederick Smith at 8:07 AM