The Chicken and The Gays 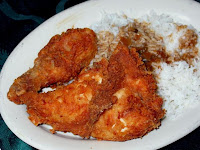 Here in California, we're a pretty liberal and progressive bunch... for the most part, and mostly along the coasts in Southern and Northern Cali.

We even voted down parental notification for minors who want to have abortions.

So you see... for the most part we're a pretty progressive and forward thinking state.

Oh yeah, we even voted for the ethical treatment of chickens and other farm animals. They have to have a certain type of living quarters, must be able to spread their wings, be all they're meant to be... before shipped off to market. Hurray for the chickens.

But the gays... apparently still can't marry in California. At least, a small majority of voters don't want the gay/lesbian couples to have the same rights as other couples when it comes to making that permanent commitment to each other.

So let me get this right... chicken rights have been attended to more than the rights of gays? Isn't that ironic?

A couple things that strike me in this developing story. One, there are still 1.5 million absentee and provisional ballots to be counted in California -- those are usually more educated and forward-thinking folks to vote in advance. Two, 70% of black voters (and over 50% of Latinos) in California apparently voted against gay marriage rights.

But we can and we will!
fs
Posted by Frederick Smith at 6:38 AM

I don't know when we will get it?