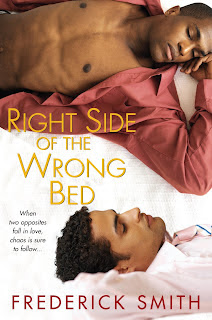 Breaking all the rules…
At thirty-three, Kenny Kane seems to have it all: good looks, a great career as a university administrator, a silver BMW, a sprawling home in the tony hills of Monterey Park, and a hot firefighter for a boyfriend – that is until he cheats on Kenny with a woman! After devoting the past seven years of his life to his ex, the last thing Kenny needs is to get involved with someone new. So when he meets Jeremy Lopez at a West Hollywood bar, Kenny is content to just buy him a drink and leave it at that.

Is the only way to go…
But Jeremy won’t take “no” for an answer. Six feet tall, dressed in baggy, low-rise jeans and sporting plenty of bling, Jeremy is “straight-up East L.A.” He’s also a mere twenty-one-years-old – and of Dominican-Mexican heritage. Except for one white boy back in college, Kenny’s always dated other African-American men.

When it comes to getting what you want…
But he can’t deny the chemistry between them. And before he knows it, Kenny’s having the time of his life – hanging with Jeremy and his boys… clubbing and hitting frat parties… feeling like a kid again. But how long can a thirty-something like Kenny keep it up? And is he really gonna find what he’s been looking for with a kid like Jeremy – or will Kenny wake up feeling like he’s on the right side of the wrong bed?

“Funny, touching, and intoxicating. Smith has written yet another compulsive read.” – Maurice Jamal, writer and director of Dirty Laundry and The Ski Trip

“Open Right Side of the Wrong Bed to join Fred Smith on a fun, rollicking ride through L.A., where the men are fabulous and the wit is as sharp as the latest pair of trendy jeans. By turns sexy, funny, and heartbreaking, this book is sure to please.” – Fiona Zedde, author, Bliss and A Taste of Sin

"Anyone who's ever been in one of those ‘so GOOD yet so BAD’ relationships will relate to Right Side of the Wrong Bed. Frederick Smith is a gifted author who has written a page turner filled with wit, comedy, and very memorable characters. Don't miss it!" – Patrick Sanchez, author, Girlfriends and Tight

Order from your favorite online retailer or independent bookstore (links inside story).
fs
Posted by Frederick Smith at 6:26 AM

Looking forward to it!

I just knew I was gonna be on tour with you this year! AWWW...But congrats!!!

You know I'm looking forward to it!!

My best to you always.

Best wishes. I promise to hang out with you at the Abbey next time.

Congratulations on another masterpiece!

Yay! Fred! I'm holding down South Pas for ya!

CONGRATS! When do we get to see the cover???

Okay I am just waiting for my advanced copy...

Congrats on your book, keep up the good work. This is my first time stopping by your blog and it's truly inspiring, which means I shouldn't give up :)

Great Book! Hope there will be a sequil! Kenny needs to reconnect with Omar! Wish there was a way to contact you.

I read both books I liked "Down for Whatever" but I loved "Right Side of the Wrong Bed." I loved the wit and the humor and the older man (who isn't really that old) younger man thing. The ending was unexpected and the ex was hot. It was a good read! I can't wait for your next book!