Saggin', or Sagging, Depending On Where You Live 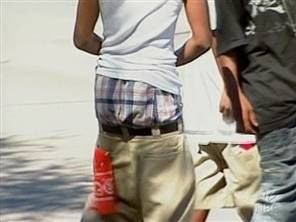 So I wouldn't dress like this, but I think it's hot, kinda sexy. Yeah, I said it.

Of course we're talking about the sagging, exposed boxers/undies, look that has been pretty popular in urban and suburban settings for a few years now.

But what's even more popular these days are the number of cities developing legislation to ban the style of dress. A number of public school districts are doing the same... developing more rigorous dress codes for their young people. (NY Times article; Minn News Tribute aritlcle; MSNBC story)

One, young people have always expressed themselves with their fashion. It's what young people do. It's also what people who have no other means to express or assert themselves in society, due to whatever category or life circumstances they face, do -- with the clothes, hair, nails, etc... Some people may not like the choice of fashion expression, and judge it harshly, but it's expression nonetheless.

But I think to legislate fashion, or to draw the conclusion that a fashion choice leads to other social issues, is a bit much. Each era, or decade, brought young people fashion that elders didn't approve of. It's kinda like a role elders are supposed to take on... disapprove of the things they did as youth.

Anyway, this weekend I saw a bunch of sagging in Atlanta. Men and women. In the clubs, at the picnic, on the streets, etc... I don't sag, but I don't hold it against those who do.

Gave me a lot of hot tips on trendy undies I need to add to my wardrobe.
fs
Posted by Frederick Smith at 1:37 PM

Each era, or decade, brought young people fashion that elders didn't approve of.

This line says it all. I think a lot like you when it comes to this topic. I think they know when and where what is appropriate.

I really don't find anything wrong with it either, although the boy in ya pic has his down way too far, there's not even a need to have pants on. But I see folks in the clubs and all that with a little bit showing here and there, hell I wear my jeans on my hips most of the time, but a shirt usually covers it. At work I dress professionally.

People need to realize it is a freedom of expression and get over it.

Sometimes it can be TMI, but other times kinda cute, lol