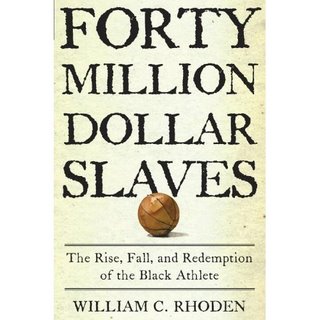 Heard anything about this book?

I just did yesterday morning, while listening to KJLH's Front Page radio show in L.A.

The book is an in-depth and academic look at the professional athletic scene, and makes the comparison that today's black athletes are the equivalent of yesterday's slaves in the U.S. South.

Except, of course, slaves had no multi-million dollar contracts, nor were they doing a job they aspired to do since childhood. However -- white ownership, black labor, the laborers entertain the masses, the owners have control. You be the judge.

I'm sure there's more, but this is just based on the little I heard of the book on the radio about the book.

Anyway, I haven't picked it up or read it yet. But it certainly sounds interesting.
fs
Posted by Frederick Smith at 7:33 AM

I've heard about this book. I may check it out from the library.

The author was on a panel along with Juan Williams and other black authors during the Harlem Book Fair
a fews weeks back.

Fox News Channel's Juan Williams also has a book out called "Enough" I plan on checking it out also.