Do We Need Another Wave? 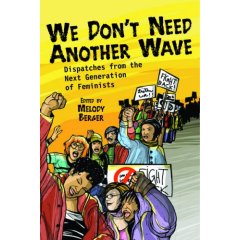 Have the SUV, soccer practice, working a 50+ week at home or in an office, and a Costco Card become the American Dream that has replaced our desire for true gender equality in the U.S.?

Considering that we haven't had a woman president in the U.S., women's rights to choose are still pretty much goverened by men, LGBT hate crimes are on the rise in big cities, women are still the majority of rape victims and survivors, and women earn less than men for the same work... do we need another wave of feminism?

Such ideas are pondered in the new anthology, We Don't Need Another Wave: Dispatches From the Next Generation of Feminists, edited by Melody Berger, and featuring contributions from Jessica Hoffmann, Stephanie Abraham, Dean Spade, and Alix Olson among others. It's published on Seal Press.

And next week in Los Angeles, Melody and several contributors to the anthology, will be pondering the questions, "Why aren't more women, LGBT folk, and people in general feminists today?" during a panel on the future of the feminist movement in L.A. and beyond on November 9 at Cal State L.A.

What do you think? Do we need another wave?
fs
Posted by Frederick Smith at 6:22 AM