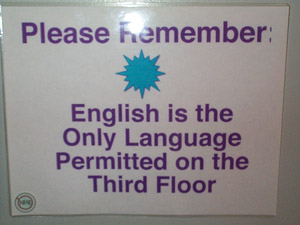 We know black and brown folks are getting it from all angles, but this story -- about a young man suspended for speaking Spanish in his Kansas City high school -- is just kinda ignorant.

Or this story -- about a white teacher imposing HIS white world view and ways on a class of elementary school students, mostly Mexican -- is just kinda ignorant, too.

Let me clarify... the stories aren't ignorant. The world view that ONLY English is acceptable in the U.S. is kinda small-minded and ignorant. Since when is it a travesty to know and speak more than one language? To me, that says someone has in effect doubled his/her vocabulary and brain capability. How can that hurt anyone?

I went to a high school where it was mandatory to take language classes other than English... for all four years. A public school. And I continued my language studies, in this case Spanish, all four years in undergrad. Not just because it was mandatory, but because I knew it was smart to know and be able to communicate with more than English speakers. And I enjoyed learning another language, and looked forward to using it abroad and in the U.S.

And now that I've moved from the Midwest to the West Coast, I'm so glad I (and my high school) had the foresight to know that knowing more than one language is just plain smart.

Folks from all around the world know it's smart to know more than one language. It seems like we in the U.S. aren't as worldy or willing to learn about other folks as our neighbors around the world are. No wonder when we're traveling abroad, people think we (U.S. residents) are dogmatic, closed-minded, and just kinda backwards/uncouth.

Benefits other countries find in requiring second-language studies.
fs
Posted by Frederick Smith at 7:35 AM

I live in KC -- this is all they are talking about in the paper and on talk radio. Whatever happened to tolerance and plain old common sense when it comes to officials in our schools? It's now official, Mr. Rubio and his attorney are suing --citing extreme prejudice.

What's funny is our neighbor Canada has everything in English and French. They recognize their French roots. Why can't we acknowledge our Spanish ones? That's why we have cities called Los Angeles and San Francisco, people!

Fred you are so right about why many abroad think we're rude, ugly Americans. Some of us think the world goes no further than the mirror and anything outside that reflection is not to be tolerated or understood.

We have so much to learn in the U.S. about appreciating differences. And not just at the food, fiesta, and fashion level.
fs

A lot of my teachers impose their views on us today. Especially in classes like, biology(the BIG BANG theory), and history(their personal viewpoints).

I had to take two years of another language. (I loved it) Some schools have up to five different choices now.

Have you read Ngugi wa Thiong'o's Decolonizing the Mind?

He describes children who spoke in Gikuyu being punished: they were forced to wear signs around the neck which read, "I am a donkey."

Not quite as bad when I was in primary and high school, but part of Kenya's pull toward "national languages" has been, in part, an inattention to indigenous ones. (With terrible results in the urban centers, where Nairobi-born kids barely speak their parents' languages, though this might be changing.)